Inside the little book Oxford Poetry 1915 we can find one of tolkien's early "fairy" poetry, a poem which achieved great popularity and was reprinted many times in various collections of children’s poetry: "Goblin Feet". 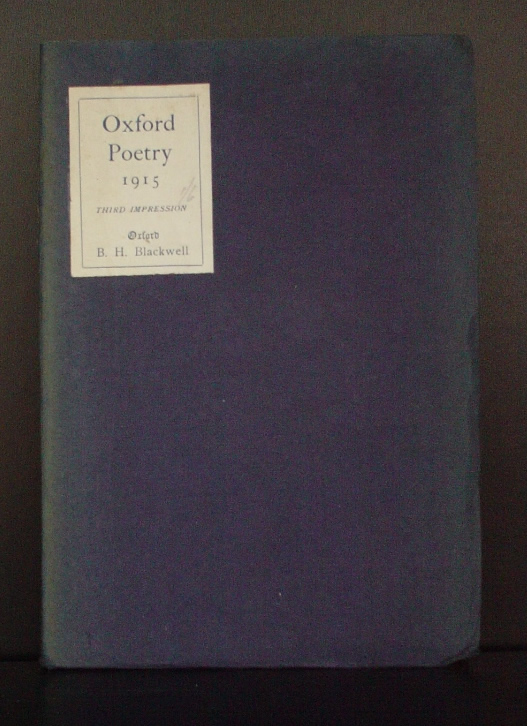 Here I will only speak of tolkien's poem, but for those interested I will give the contents, as you can see there are many familiar names:

The poem "Goblin Feet" was written in a very hard period in tolkien's life. Hostilities broke out when Tolkien, 22, had completed the second year of his English degree course at Oxford University. In the summer of 1914, millions of young English men were signing up to fight in World War I. When Britain declared war on Germany, on 4 August, he was on holiday in Cornwall. By October, despite pressure from his aunts and uncles, he had decided to defer enlistment in the armed forces until after his degree. He said later that this was because he did not relish military action; but at the time he told friends that as a young man with a fiancee and little money, he had to prioritize his future academic career. Tolkien was glad to discover that there was a program at Oxford which gave him military training while he finished his studies.

In October, beginning his final undergraduate year, Tolkien joined the Officer Training Corps. Oxford was now full of soldiers, makeshift military hospitals and war refugees. Friends enlisted in the army, including G.B. Smith and R.Q. Gilson, whom he met up with in December 1914 in a 'Council of London' that saw their clique, the TCBS (The Tea Club Barrovian Society), acquire a new moral and cultural sense of purpose.

The other three members of tolkien's T.C.B.S. (The Tea Club Barrovian Society) were going to join the war soon, and felt that it was important to spend some time together before they went. So during the Christmas break of 1914 the T.C.B.S. meet for the last time. They spent a weekend together in London, smoking pipes, drinking beer, sharing stories and thoughts and having an all together wonderful time.

Immediately after the weekend in London Tolkien began to write poems. Among these was "The Man in the Moon Came Down Too Soon", which eventually was published in The Adventures of Tom Bombadil. He selected a similar "fairy" subject in "Goblin Feet", that was written on 27-28 April 1915 to please Edith Bratt (later Mrs. Tolkien) because she loved tales of "spring and flowers and trees, and little elfin people." The result was as close to the Victorian depiction of fairies as it can get. The fairy creatures are called by a variety of names, like “leprechauns” and “gnomes” and there’s references to their “fairy lanterns”, the “fairy lane” they tread, and to their “goblin feet”. The issue of fairy diminutiveness is constantly underlined by the abundant presence of adjectives like “little”, “slender” and “tiny”, and although it is not very explicit, the fairy creatures seem to have acquired insect qualities, possibly associated with their ability to fly, since they are grouped together with “beetle-things” and “honey-flies”. On the whole, the power of the poem is that it relies on a sketchy, enchanted imagery, where little supernatural beings are imagined without concrete detail, as a “slender band of grey”. At that time it can be said to be his first published work of any significance. Still Tolkien soon fell that the composition of occasional poems without a connecting theme was not what he wanted.

With tolkien's mind occupied with the seeds of mythology he prepared for his final examination in English Language and Literature. Having achieved a first-class degree in June 1915, Tolkien enlisted in the army and reported for basic training. He spent nearly a year stationed in England. Because he was a university graduate he was given an officer's commission and had to go through advanced training. He was not interested in leading a platoon so he decided to specialize in signaling. Signaling just seemed to be the best use for his talent with languages. He was eventually given the post of signaling officer for the Thirteenth Battalion of an army section known as the Lancashire Fusiliers, purely a training unit, near Lichfield, Staffordshire, and as winter drew in he moved with it to bleak camps on Cannock Chase. Tolkien was bored by training, oppressed by military discipline and depressed by the war. In a letter that he wrote to Edith he said: “The usual kind of morning standing about and freezing and then trotting to get warmer so as to freeze again… All the hot days of summer we doubled about at full speed and perspiration, and now we stand in icy groups in the open being talked at!” He was defiantly not impressed with the training.

Tolkien hoped to get some income from his poetry. The poem "Goblin Feet" had been accepted by Blackwells for the annual volume of Oxford Poetry, and encouraged by this he sent a selection of his verses to the publishers Sidgwick & Jackson, sadly all were rejected. At the start of 1916, Tolkien began to receive letters from Smith and Gilson describing the horrors of the Western Front. In March, Tolkien returned to Oxford for his official graduation and, in Warwick, married Edith Bratt, who then took lodgings at Great Haywood, near Cannock Chase.

tolkien's first encounter with fighting was in France, in the Battle of the Somme, which is remembered as the bloodiest battle ever fought in history. On the first day of the battle nineteen weeks before Tolkien arrived, nineteen thousand British troops were killed. By the time the battle was over more than eight hundred thousand of the British had been killed. When Tolkien arrived he was stationed nearby in the town of Bouzincourt, where he waited to be sent into the front lines of battle. While he waited, Tolkien came across a most unexpected and pleasant surprise. One of his fellow members of the T.C.B.S., G.B. Smith arrived in the town for a brief rest. He had already been in the front line of the battle and fortunately returned uninjured. His company had been pulled back to rest before returning to battle. Over the next few days, the friends talked much about life, poetry, and war. Before long tolkien's battalion given orders to go into battle. Tolkien and Smith said goodbye for the last time.

Even though the battle had raged on for many weeks, and bodies had been mounting, the Thirteenth Battalion of the Lancashire Fusiliers marched forward with high moral. They were fighting for the freedom of their country and maybe even for the freedom of the world. They had been told that the battle was nearly over, as advance troops had surely dismantled the German defenses. It turned out that the advanced troops had failed, and when Tolkien arrived on the battle field he found a scene that he described as pure animal horror. A sea of dead and dying men covered the once beautiful French countryside that had been stripped bare of all things lovely and replaced with mud, trenches, and burned blackened trees. The British troops continued to advance, but many of tolkien's company were killed and the assault did not rout the Germans. Fortunately, Tolkien survived and was sent back to Bouzincourt to recuperate. When he arrived there he found a letter from G.B. Smith informing him that Rob Gilson had been killed in battle. The T.C.B.S. was no more. Over the next three months tolkien's battalion alternately advanced into battle, and retreated to the town to regroup.

Tolkien never forgot the brutality and horror of the battle. Many years later he drew on these memories to create his own lands. The blackened landscape of Mordor, and the Battle of Helm's Deep were both based on The Battle of Somme.

At older age Tolkien showed rejection of the poem "Goblin Feet". When asked for permission to have the poem reprinted in yet another anthology in 1971, he is reported to have answered: “I wish the unhappy little thing, representing all that I came (so soon after) to fervently dislike, could be buried for ever”
However, despite the fact that it was rejected later by Tolkien, the poem does reflect his ideas and influences at the time, and it fits very well with the imagery and subject matter both of “Wood-Sunshine” (an earlier poem by Tolkien), and of his next venture, the poem “You and Me / and the Cottage of Lost Play”.