On the 15th of October 2007 HarperCollins published a revised Anniversary Edition of the long unavailable children’s story Mr. Bliss, written and illustrated by Tolkien himself.

Originally published in 1982, the book has been out of print since the 1990s. This slipcased hardcover edition marks the 25th anniversary of publication.

It has now a completely different look as the first edition, and has been completely redesigned to make it the definitive edition, ideal for collectors and newcomers to the story.

It is the perfect Christmass gift and looks absolutely stunning. In this article I'll tell all about the new revised edition and will tell the history of Mr. Bliss' conception, the first edition and add some nice pictures.

The Revised Edition of Mr. Bliss

The first thing you notice when looking at the revised edition of Mr. Bliss is that the book has grown in size. It is much larger then the first edition and also comes inside a good looking slipcase. Everything about this edition is a big improvement and the revised edition is simply 'fantastic' in all respects.

The printing and binding company Imago in China has done a brilliant job! The improvement can best be appreciated if you lay the revised edition next to the first edition; you immediatly get the feeling the revised edition can easily be called the 'deluxe' edition of Mr. Bliss.

During the Children of Hurin Release Party we had the opportunity to talk with Matt Blessing, the Head of the Department of Special Collections and University Archives at Marquette University in Milwaukee (who hold the manuscripts for four books: The Hobbit, LOTR, Mr. Bliss (the original hand drawn book), and Farmer Giles of Ham). I knew there was being prepared a new edition of Mr. Bliss and so I asked: We will see a new printing of Mr.Bliss this year and the illustrations are made from new scans... how was this realized?

"Yours truly made the scans on a Epson scanner...huge TIFFs. The clarity is impressive, if I say so myself. The new edition will really show off tolkien's skills."

In the revised version the pages can be seen as facsimiles put on a green background; while in the old version the scans are reproduced within a very thick black line. The new way of presenting gives us the idea that the real pages have been glued on top of a green background, you can even see the damages to the edges of the manuscript, which is very wonderful.

Not only does this revised edition feature the newly scanned manuscript pages it also has redesigned text. Where in the 1st edition the text is just placed at the opposite page (to the left) it now also has received a layout, namely it place the textblocks exactly opposite tolkien's handwritten text and leaves blanks where the images are.

Also the lettertype is a tiny bit larger, which is much better in a children book.

So, whe you will buy this new revised edition you will see that each page of Tolkien’s original 1930s manuscipt is reproduced in facsimile, with his own coloured illustrations and distinctive handwriting. Facing each page is the story, fully typeset for ease of reading, especially for younger readers. All pictures have been newly scanned from the archive manuscripts to give the best possible reproduction. We have to thank Matt Blessing for making these wondeful scans; the result is abslutely stunning.

The First Edition of Mr. Bliss 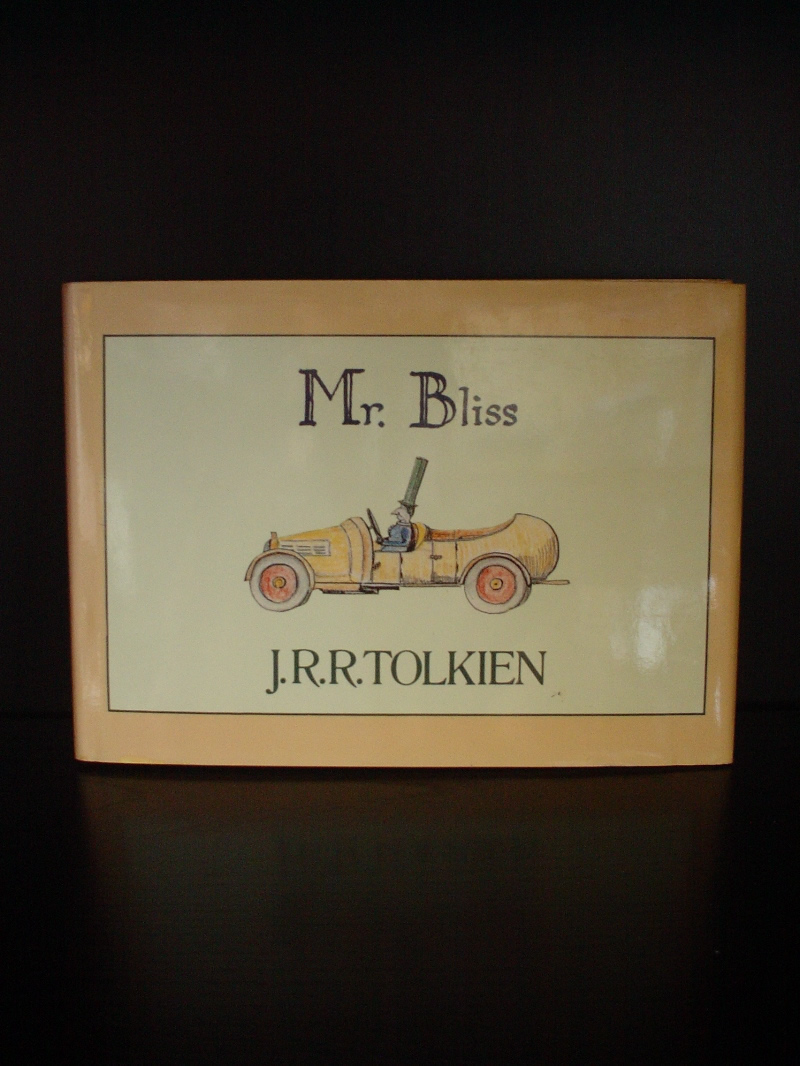 By late 1964 the story came to the attention of Clyde S. Kilby, who had met Tolkien that year and had been corresponding with him about Mr. Bliss and proposed to get it published. Tolkien had started to dislike the story and saw it as a private joke, and decided it would be best for his reputation to have it published posthumously (1).

And so it happened, 9 years after tolkien's death, Mr. Bliss was finally published in 1982, with tolkien's difficult-to-read handwritten story and illustrations on one page, and a typeset transcription on the facing page. The story was reproduced exactly as Tolkien created it - handwritten with lots of detailed and uproarious colourpictures.

The story we read in the book is a complete and highly imaginative tale of eccentricity. Mr Bliss, a mannotable for his immensely tall hats and for the girabbit in his garden, takes the whimsical decision to buy a motor car. But his first drive to visit friends quickly becomes a catalogue of disasters. Some of these could be blamed on Mr Bliss’s style of driving, but even he could not anticipate being hijacked by three bears. As for what happened next - the readers, whether young or old, will want to discover for themselves. Thankfully all ended well, and even the yellow motor car with red wheels (to which Mr Bliss has taken an understandable and great dislike), came in useful at the end...

According to Mrs. Michael Tolkien, the story was inspired by young Christopher tolkien's toy car, not, as stated by Humphrey Carpenter in Tolkien biography, by tolkien's own vehicular mishaps with his first car, purchased in 1932. The bears were based on toy bears owned by tolkien's sons. Jared C. Lobdell assigned the writing of the story to 1928-32 (2). But Christina Scull and Wayne Hammond give a suggestion that the tale might be conceived a bit later, because of the use of the name Gamgee Gaffer in Mr. Bliss, a name Tolkien and his kids created for a curious local character during a summer holiday in Cornwall (3).

The narrative binds the story and illustrations tightly together, as the text often comments directly on the pictures. Finally it will be for sale again and we can all enjoy the tale once again!