On September 21, 2007 the UK The Hobbit turned 70 and this year on March 1, 2008 we celebrated 70 years of the US edition of the Hobbit (1). For the 69th anniversary I wrote an article on the first edition of the UK The Hobbit. Last year, in 2007, I wrote an article on the US first edition of The Hobbit. This year, the 71st anniversary of The Hobbit, it is a good occasion to look back at 70 years of Tolkien collecting and The Hobbit collectables and ephemera, since most Tolkien collectors all started by reading and buying a copy of The Hobbit. I'll create here a series of articles on The Hobbit collecting and will try and touch some of the less common Hobbit books and collectables, present an overview of the first and the deluxe editions. Since this series of articles takes a lot of work I hope to get them all published as soon as possible... maybe in a few weeks time I'll have them all posted.

tolkien's The Hobbit was first published on September 21, 1937, and immediately proved popular. It is however unclear when the very first "Tolkien collectors" emerged. This phenomenon probably started with the publication of The Lord of the Rings, first published in 1954 through 1955. This gave rise to the Tolkien fandom as a cultural phenomenon and probably the true first "Tolkien collectors" emerged around that period. Still it took until in 1980 that the first bookseller's catalogue appeared solely devoted to Tolkien, called Eorclanstanar [Precious Stones] or The Hobbitiana: an offering of rarities by J.R.R. Tolkien (2).

Still a long time before the publication of The Lord of the Rings there have been published a lot of Hobbit related ephemera, which now have become highly sought after items for any serious Tolkien collector. In the following article I will talk about some of the many Hobbit related ephemera. Of course there are many other 'Hobbit' items that I will not talk about (but who knows one day I come and add some more... if time allows). 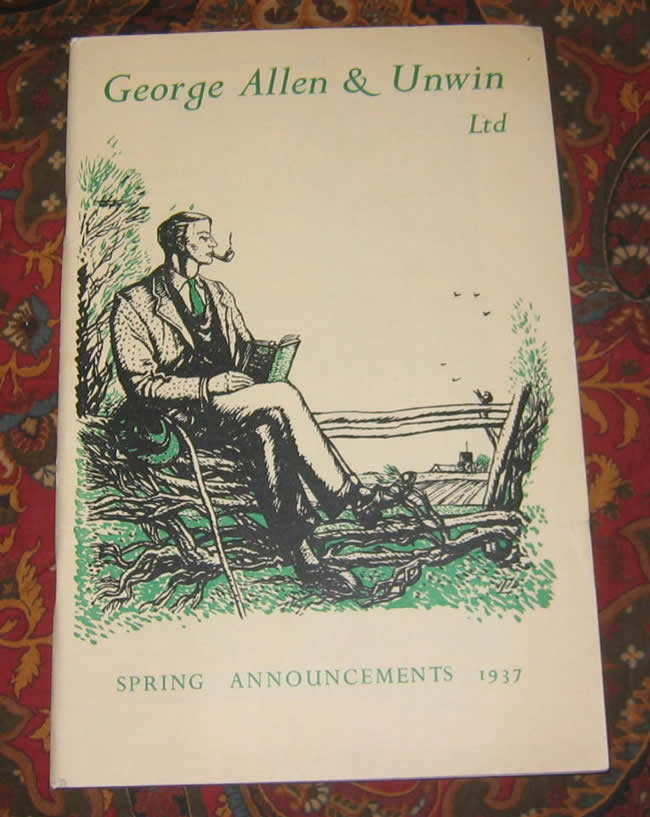 The first known announcement in print of the forth-coming publication of The Hobbit dates back to early may 1937 and can be found in the George Allen & Unwin Spring Announcement.

This catalog has now become very valuable Tolkien ephemera and is extremely rare. 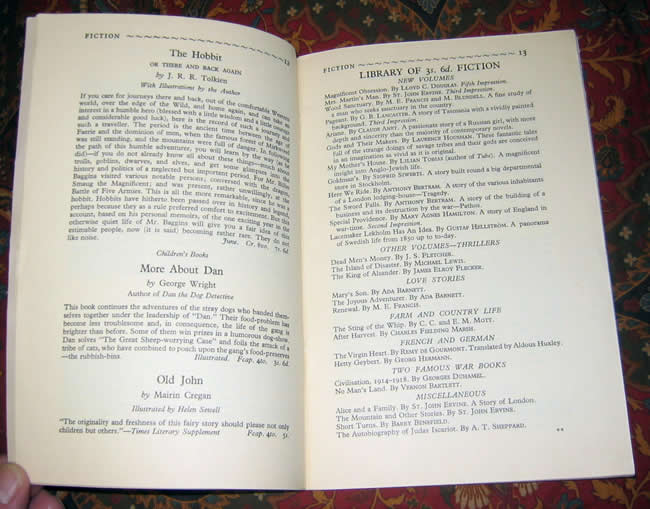 Also the George Allen & Unwin Summer Announcements 1937 catalog mentions the forth-coming publication of The Hobbit and almost never comes up for sale. This booklet is also the first to note "with Illustrations by the Author".
The Autumn Announcements 1937, which I have not seen come up for sale up to now, reprinted tolkien's blurb for The Hobbit. The blurb was later printed on the front flap of the dustwrapper of the 1st Edition of The Hobbit along with additional remarks by the publisher. It is also reprinted in J.R.R. Tolkien: A Descriptive Bibliography and The Annotated Hobbit.

When The Hobbit appeared in 1937, tolkien's friend C.S. Lewis unashamedly published rave reviews in TIMES LITERARY SUPPLEMENT (October 2, 1937) and the London TIMES (October 8, 1937). Both are now valuable Tolkien ephemera and can be considered as the very first pieces of scholarly criticism of tolkien's work published.

In the first review in the London Times Literary Supplement, The Hobbit was put in a class with Lewis Carroll's Alice's Adventures in Wonderland and in the second with Grahame's The Wind in the Willows. The Hobbit is described as a book where a number of things have come together; a fund of humour, and understanding of children, and a happy fusion of the scholar's with the poet's grasp of mythology.

Another very early and extremely rare Tolkien collectable is a letter about The Hobbit published in THE OBSERVER, London, February 20, 1938. Tolkien wrote in reply to letter, signed ‘Habit’ and published in the Observer on January 16, where someone speculates the word Hobbit might have been suggested by Julian Huxley’s "account of 'the little furry men' seen in Africa by natives and … at least one scientist" and even claims there could exist an earlier fairytale called The Hobbit, which later turned out to be false. The author of this letter wanted to find out about the origin of word Hobbit, to which Tolkien replied with many words and a lot of passion. While originally it had not been Tolkien’s intention that his reply would have been published publicly, this particular newspaper has now become very valuable. Tolkien’s letter has been reprinted in Letters of J. R. R. Tolkien (Letter 25), but the letter signed Habit can only be read if you find the original.

In March - April 2008 the American Magazine, called The Horn Book Magazine, published on page 69 a 3/4 page advertisement for The Hobbit. In the same magazine there is on page 94 a ahort review & synopsis of The Hobbit by Anne Eaton (at that time critic of Children's Books for the New York Times). She wrote that the Hobbit was an unusual and distinguished book and, like Alice in Wonderland came from Oxford University. On the page 95 it even gave a full page picture of "The Hill: Hobbiton across the Water", which was used as a frontispiece in the 1st US The Hobbit.

Also in 1938, the American HORN BOOK MAGAZINE published in its May-June issue favorable comments on tolkien's The Hobbit. It mentions that for the Second Annual Children's Festival, the Herald Tribune judges - Mrs. Dwight Morrow, Miss Mabel Williams, Mr. Stephen Vincent Benet, Mr. Robert Lawson and Mrs. May Lamberton Becker, Editor of the Herald Tribune's page, "Books for Young People" - have awarded one prize of $250 to J. R. R. tolkien's The Hobbit as the best book of the spring for younger children. It also reprinted five pages from Chapter one and had a black & white reproduction of The Hill, the frontispiece of the American Hobbit.

The Hobbit turned out to be a big success in America and by the end of 1938 more then 5000 copies had been sold in the US. The real success of Tolkien however started in the 1960's, once again in America, where the students fell for Tolkien’s books in unprecedented fashion, and sales of the Hobbit soared to the present multimillion-copy level. For the release of the 70th anniversary edition of The Hobbit, in 2007, Harper Collins told that The Hobbit has been translated into almost 50 languages and sold over 100 million copies.

While the Tolkien Estate was always very protective for adaptations of Tolkien works, there was made a very radical serialization of The Hobbit, which appeared in a British magazine called ‘Princess’ that aimed at teenage girls. The story was split up into fifteen installments and issued on a weekly basis between October 10, 1964 and January 16, 1965.

The covers of the magazine can now be called vintage and the illustrations by Ferguson Dewar where very original and even funny. The text of the Hobbit was very successfully reduced to a minimum by cutting out a lot of parts. Princess Magazine is now hard to find and serious Tolkien collectors are willing to spend a lot of money on a complete collection of the Hobbit serialization.

In the article we can read about the success of Tolkien’s books in the United States, the view on the Hobbit by American college students and the forming of the first Tolkien Societies. This was the first major article to address "the Hobbit-Forming World of J.R.R. Tolkien", the new phenomenon that was then called "Tolkien people" and we know these days as Tolkien fans, Ringers, or just Tolkien geeks. This article still gets quoted these days in studies on Tolkien fandom and has been a collectable Tolkien item ever since its publication.

Today a lot of people know that when J.R.R. Tolkien wrote his masterpiece The Lord of the Rings, he rewrote part of his earlier book, The Hobbit. The major change was in the fifth chapter "Riddles in the Dark". John D. Rateliff has now listed all changes in the newly published The History of the Hobbit.

Yet, in 1985 not a lot of people were aware of this change and there for the original fifth chapter saw a reprint in Masterpieces of Terror and the Supernatural: A Treasure of Spellbinding Tales Old & New, Selected by Martin Kaye. This book is not so hard to find in perfect condition and therefore an easy way to obtain the Riddles in the Dark in its first form.

The year 1987 was a special year for Tolkien lovers and collectors, since then we celebrated 50 years of The Hobbit. A lot of exhibitions where held and some very fine catalogues where produced. Also we see the appearance of the first commemorative booklets by the major Tolkien publishing houses. These have now become Tolkien collectables that now and then can be found on the market.

For example, from February 21 to May 23, 1987 there was an exhibition of Drawings for The Hobbit by J.R.R. Tolkien at the Bodleian Library in Oxford. They produced an 8-page booklet.

From June 11 to September 30, 1987 there was an exhibition of The Hobbit drawings, watercolors and Manuscripts by J.R.R Tolkien in Museum of Art at the Marquette University of Milwaukee. The 44-page catalogue with black & white illustrations is now a desired item by any serious Tolkien collector.

Members of The Mythopoeic Society all received a special invitation for a reception, with honored guests Christopher Tolkien and John Bellairs, and opening of the exhibition. Which reproduced the image of the Exhibition catalogue cover, but this time with "Bilbo comes to the huts of the Raft elves" in black & white. If this invitation comes with the catalogue it can be rather expensive to obtain.

Unwin Hyman Limited also published an 8 page Illustrated commemorative booklet called The Hobbit 50th Anniversary 1937-1987 and a year later a 12-page booklet was produced by Houghton Mifflin Company called The Hobbit 50: Fiftieth anniversary 1938-1987: A Commemorative Booklet Celebrating the 50th Anniversary of The Hobbit. This small booklet contains an essay called 'The Making of the Hobbit' by Brian Alderson, A short history on the Publication of the Hobbit. It also contains a facsimile of Rayner Unwin's Book Report (30th October 1936) on the Hobbit Manuscript, an extract from tolkien's Letter of 19th Decemeber 1937, with the first mention of the Lord of the Rings and an illustration by Tove Jansson for Britt G. Hallqvist's Swedish translation of the Hobbit.

Circa 1988 we see the publication of an invitation card where Ballantine Publishers invites everyone to join the festivities in September to celebrate the 50th anniversary of the publication of the American edition of The Hobbit. On the front it writes in gold: "Tolkien is Golden". This small Tolkien ephemera is now very difficult to find.

The American publisher also published a special 10 page promotional phamplet in 1988, called The Hobbit 50: Fiftieth Anniversary 1938-1988. The text was written by Austion Olson. Today it is an uncommon ephemeral item.