The Hobbit Comics adapted by Chuck Dixon and illustrated by David Wenzel (13.10.13 by Pieter Collier) - Comments

In 1989 The Hobbit was adapted in a three issue comic book series, published by Eclipse Comics. The story was adapted from the original by Chuck Dixon, and illustrated by David T. Wenzel. Even as a young boy David Wenzel, of Durham, knew he wanted to be an artist. When he went to Hartford Art School and read The Hobbit by J.R.R. Tolkien, he knew he wanted to be an illustrator. The Hobbit has been a big part of his life ever since.

"Back then, there were no illustrations for the book," he said, "so I started illustrating it because I thought it needed drawings. My senior year I had a show of paintings that I did for The Hobbit and Lord of the Rings."

His drawings at a Simsbury gallery drew the attention of a publisher, who asked him to redo the illustrations for Middle Earth, the World of Tolkien Illustrated. After freelancing for Marvel Comics, he and his friend, Rob Walsh, who was versed in Nordic mythology, decided to work together on a book he had conceived.

"The premise," Wenzel said, "was to make one of Tolkien’s character races seem to exist in reality. We found out that there were incidences where dwarfs were integral to moments in history. Some of the hieroglyphics in ancient Egypt show dwarfs making jewelry. Their small hands allowed them to make intricate designs."

When a college friend learned that the publisher he was working for was doing a graphic novel version of The Hobbit, he told them, "You gotta call David Wenzel." Wenzel illustrated the three volumes that eventually were compiled into one book, and has remained busy over the years doing upgrades.

In 1989 The Hobbit by J.R.R. Tolkien was adapted from the original by Chuck Dixon, and illustrated by David T. Wenzel.

The three published issues were called Book One, Book Two and Book Three (only so on the book's spine; nothing is seen on the front cover). The issues are numbered continuously: part one comprises pages 1 to 44 (up until the riddle-game), part two pages 45 to 88 (up until the rafts of the Lake-men), and part three pages 89 to 133.

A one volume trade paperback

In January 1990, Eclipse Comics, bound The Hobbit in one volume trade paperback.

And another one volume softcover

A limited signed edition of 600 copies

Of course a one volume release was also the best time to create a limited signed edition. And so Eclipse Books made 600 copies and had them signed and numbered by David Wenzel.
A nice case was made to house the signed graphic novels with ISBN 1-56060-068-3.
Here you can see an example of #97 (with thanks to Kelly De Wit, who owns this copy) 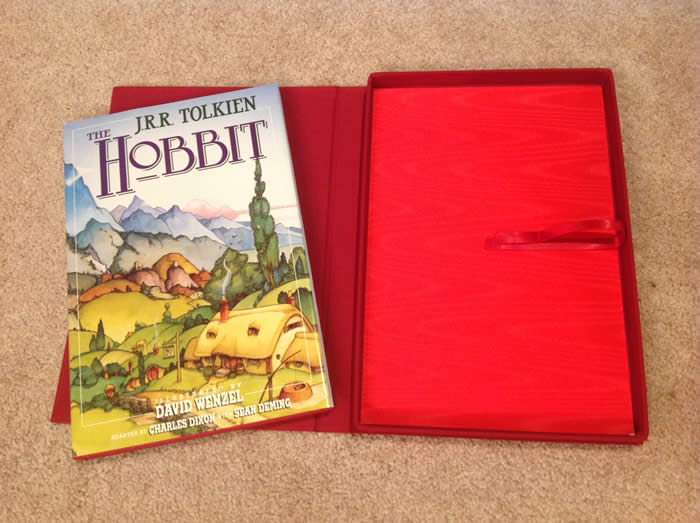 And yet another UK one volume paperback The Hobbit

Already in 1991, just one year after the first release of The Hobbit by Unwin Paperbacks, HarperCollins decided to release The Hobbit illustrated by Wenzel once again. No major changes can be observed. The ISBN was 0 261 10266 4.

Also Ted Smart / Grafton took some of the publishing for their number and released the exact same book under ISBN 0 007 66370 6, also as a softcover. Grafton, was used by Unwin to get some books released. And as said Collins was bought by Rupert Murdoch's News International in 1989 to create the HarperCollins publishing conglomerate. The name Grafton disappeared as a separate brand circa 1993. Fun to see they still managed to get a Hobbit released.

The French did not only release Bilbo Le Hobbit in two volumes they also released a one volume hardcover with dustjacket in 1991. The publication company responsible was Glénat. This version must have been reprinted several times since I have seen publishing dates of 1994, 1996, etc. All printings however have ISBN 2 7695 156 8.
In 1994 the publisher was France Loisirs, in 1996 it was Comics USA.
I have also seen a similar book, but with the dustjacket, from 1992 released by Comics USA, this time around with ISBN 2 7242 5554 2.

Translated into Catalan by Josep Alcalde, El hòbbit was released by Norma Editorial with ISBN 84 7904 138 2. Here we see the cover of the original first book but it was released as a one volume softcover, bringing all three parts together in one book.

Lo Hobbit a fumetti was published in 1997.

Translated into Italian by Caterina Ciuferri, Lo Hobbit a fumetti was released by Rusconi with ISBN 88 18 12163 4. This is probably the most unique cover produced. Once again we see the Hobbit being released as a softcover.

Glénat released Bilbo Le Hobbit once again with ISBN 2876951568. It is sort of similar to the previous French one volume. Half of the cover takes up info about 'the great classics of the 90's'. Of all covers this is probably the less succesful. At least they reproduced the older covers in the book.

Ithaki Yayinlari released the Hobbit with ISBN 9756902272 as a one volume softcover. The Turkisch translation was done by Özlem Alpin Kurdoglu.

While there already existed a three volume series in German, Carlsen Comics decided it was time to release a one volume edition and also opted to get a new translation, namely by Hartmut Klotzbücher. A softcover was published with ISBN 3 551 76101 9.

Lo Hobbit a Fumetti released again in Italian in 2001.

While there already existed an Italian edition, Bompiani released a new version of Lo Hobbit a Fumetti illustrated by David Wenzel in 2001. This time around the translation remained the same, namely by Caterina Ciuferri. The book just received a new cover and now carried the Bompiani logo and ISBN 88 452 9081 6. In 2009 we see another print of the same book with new ISBN 978 88 452 9081 7 and the new Bompiani logo on the front.

In 2001 released The Hobbit with a brand new Wenzel cover

While most were still into translating the book with the first cover Ballantine Books / Del Rey decided to get Wenzel to create an amazing new cover and re-release the book under ISBN 0 345 44560 0. While I very much this piece of art, it sort of looses contact with the illustrations that are used inside the book. Still a very nice edition and a must have for any Hobbit comic book collector.

Translated into Catalan by Lorenzo Diaz (so not the same as the first translation!), El Hobbit was released by Norma Editorial with ISBN 84 8431 432 4. Here we see the cover of the first book but it was released as a one volume hardcover.

A serbian translation was made in 2002.

Natasa Veljkovic was the translator and the publisher sva prava NNK Internacional Beograd. The books are softcovers, and sit in a great looking folder.

The in 1991 printed two hardback edition by Comics USA was reprinted in 2002 with new covers. Editions Vents d'Ouest was the publishing company and the cover illustrations by Eric Herenguel. These two books sit together in a box and carry ISBN 2 8696 7995 5 and 2 8696 7996 3.

The Hobbit translated into Portuguese in 2003.

Translated into Portuguese by Helena Soares, Hobit was released by DEVIR with ISBN 972 8631 26 X. The cover illustration by Eric Herenguel was reused for the Portuguese edition. But here we saw a softcover one volume edition.

Translated into Czech by Frantisek Vrba, Hobit was released by Mlada fronta with ISBN 80 204 1027 9. Here we see the most common cover used for the one volume sofcover editions.

This new edition has been completely re-scanned from the original paintings to achieve more accurate and vibrant colours, with David Wenzel revisiting the work to provide sensitive improvements and additions to the original edition. The book includes a magnificent and completely new cover design by Wenzel himself.

With more than 30 pages of new artwork and improvements by the artist, this new revised edition is the most authentic version ever published, to delight Hobbit fans old and new.

Slovak edition was released in 2007.

In 2007 Argo released the revised edition in Slovak. Hobit was released with the new revised cover and had ISBN 978 80 7203 934 0. It was translated by Stanislava Pošustová-Menšikováa. Nice thing is that they opted to go for a hardcover with dust jacket!

German revised edition was released in 2008.

In 2008 Carlsen Comics also released the revised edition in German. Der Hobbit was released with the new cover, slightly darker then the original and carrying ISBN 978-3-551-76101-9.

A one volume edition was released in French in 2009 by Delcourt, from Paris in France.

A Polish translation of The Hobbit comic arrived in 2009

A one volume softcover edition was released in Dutch in 2010 by Minx. The translation was done by Fanneke Cnossen and the most famous Tolkien translator Max Schuchart. While the Dutch were the first to translate The Lord of the Rings, one can wonder what took them so long to translate the Hobbit comic into Dutch. The book received ISBN 978 90 225 5707 5.

To coincide with the upcoming The Hobbit movies, a new edition, with six new pages of artwork, was be published on 12 September 2012 by DEL REY - Ballantine. With ISBN 978 0 345 44560 5 and a new stunning cover and fine movie like typography, this The Hobbit illustrated by Wenzel is ready for a new generation.

Above are several examples of The Hobbit comics adapted by Dixon and illustrated by Wenzel. I know of translations into Portuguese, Dutch, Greek, ... , one volumes, two volumes and three volume editions. So here you have it. Please send over scans and background edition about the comics you own, so we can make here a small history of all the Wenzel hobbits and translations. Don't hesitate to send over any info you have!