My name is Pieter Collier, I live in Wilrijk (Antwerp) in Belgium and am the webmaster and creator of this website, a father and husband, a full-time freelance webdesign and social media consultant, a writer, and an avid Tolkien book collector.

In 2011 there was released A Tolkien Tapestry: Pictures to accompany The Lord of the Rings, which I helped to see the light.

In June 2006 I was asked to do an interview with Abebooks, most of the article is reproduced down here.
Other interviews with me can be read online at Books Tell You Why, Middle-earth News, Britta Siemen, Cyberdusk, Bull in a coffee shop, Ephemera, Feyten en Fillet, Klara and Julievandendriesschen. 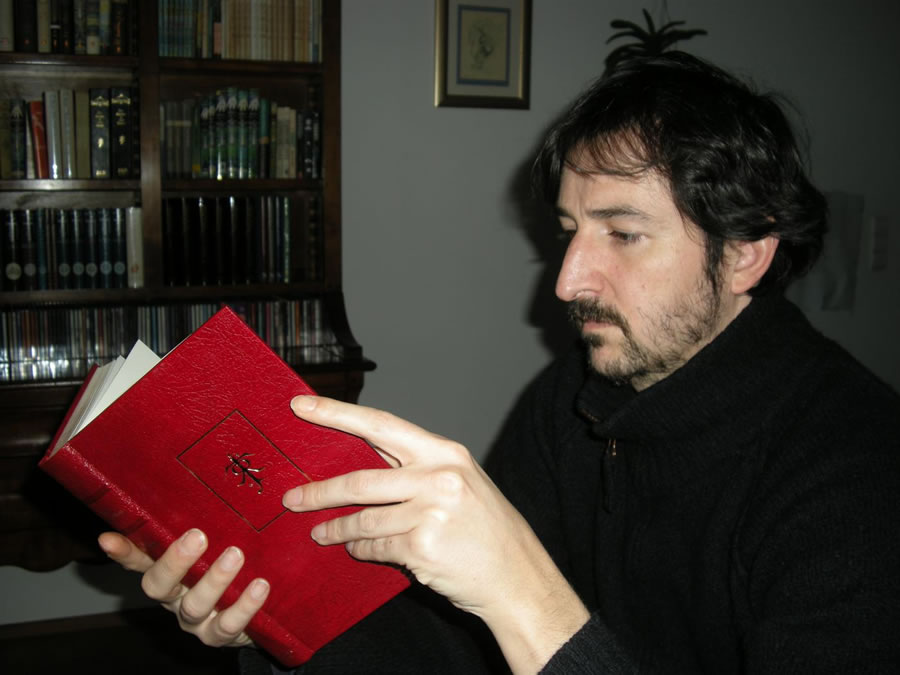 How did you get started in collecting?

In the beginning I just wanted to acquire every written word by J.R.R. Tolkien, so it wasn’t long before I bought Farmer Giles of Ham, Smith of Wootton Major and The Silmarillion. In my search for more Tolkien material I constantly discovered new books to read and collect. First I found nicely illustrated editions, then I saw the calendars, and soon I bought some biographies, books on Tolkien art and some fairy tales. Before I realized it I had acquired a nice Tolkien collection.

The year 1992 was an important turning point in my life. Johan Vanhecke organized a J.R.R. Tolkien Exhibition in Antwerp, Belgium, which I visited several times. By then I already had a lot of Tolkien books but the exhibition showed me how much more was out there. It also made me realize that I was not the only huge J.R.R. Tolkien fan. From that period I started tracking down any Tolkien and Tolkien-related books that I could find. Soon I found my way to antique book dealers and book fairs, where I'd find some books and a lot of my rare editions. Via the Internet I got into contact with some good antique book dealers, and was able to search the whole world for rare Tolkien books. Collecting now became a lot easier!

Dutch Hobbit cover In 2001 when the Lord of the Rings movies were announced everything changed. Naturally, prices began to rise and a lot of collectors appeared. In a few years time the value of some books rose to incredible amounts, as interest surged. This was also a personally exciting time, though, as suddenly there were many more people to share my passion with.

What do you collect?

Since my collection now has almost every single edition from 1966 up to the present day and many of the older editions, I primarily look for limited / numbered and signed copies and other rare Tolkien books. I’m also always tring to find proof copies, rare books like mint first editions and books from the personal library of Tolkien.

For the rest my collection is rather fluid with pieces coming and going. I have learned that finding a book is much more fun then holding onto it, so I have been helping out other collectors in getting together nice collections!

How big is your collection?

There are now about 1100 Tolkien books in my collection, of which about 250 are proof copies of all Tolkien books and about 100 are books from tolkien's personal library.

Another large part of my book collection consists of Dutch Tolkien translations. Being from Belgium this was the easiest to collect, but the majority of my collection is in English, both UK and US editions. Most of the books are Middle Earth related (different editions of The Hobbit, The Lord of the Rings, and The Silmarillion), but I also have a lot of Tolkien’s academic works, fairy tales, early poetry and other essays.

What has been your greatest find so far?

One day at a rare print fair I found a postcard sent by tolkien's father, from South Africa to England, just before he died. It's a one of a kind item!
There are so many stories to tell, for example the day I picked up a signed copy of The Hobbit at an oxfam shop, or managed to acquire a photograph signed by J.R.R. Tolkien himself. The greatest finds are those with the best stories and not always those with the biggest value!

Tell us about your Web site.

I started Tolkienlibrary.com in November of 2002 and began writing articles to help other Tolkien book collectors. In the beginning the idea was to create a bibliographical site, but later on it evolved more and more towards a general Tolkien collector resource. The project is still growing and fills a big part of my life.

In 2007 once again I was awarded an Imperishable Flame Award, namely the Tolkien/Inkling Fan Community Award for organizing The Children of Húrin Release Party, and event that many will look back to with a big smile!

Since then the site has kept growing and getting bigger. Now I hope to find some time to make it better.

What does collecting mean to you?

Collecting Tolkien books is a big part of my life and has been for over 25 years. Being 35 (I write this in 2013), this is funny to say! Collecting Tolkien is a never-ending story; you never know what lies around the next corner. Rare editions show up weekly on Abebooks and while the The Lord of the Rings movie hoopla has finally died down, the books and book collectors are more active then ever!