Since 1937, few books have provided more pleasure than J.R.R. tolkien's The Hobbit. Originally published in England with a first printing of 1,500 copies, The Hobbit today celebrates its 69th anniversary!

In a 1955 letter to W. H. Auden (Letters), Tolkien recollects in the late 1920s, when he was Professor of Anglo-Saxon at Pembroke College, he began The Hobbit when he was marking School Certificate papers. On the back of one of the papers, he wrote the words "In a hole in the ground, there lived a hobbit". He did not go any further than that at the time, although in the following years he drew up Thror's map, outlining the geography of the tale. The tale itself he wrote in the early 1930s, and it was eventually published because he lent it to to some people outside of the family, including C.S. Lewis, Elaine Griffiths, the Reverend Mother St. Teresa Gale (the Mother Superior at Cherwell Edge, a convent of the Order of the Holy Child Jesus), and one child, a girl of twelve or thirteen, presumably Aileen Jennings, the older sister of the poet Elizabeth Jennings, whose family was friends with the Tolkiens, who ecouraged him to finish the book. Finally it was seen by the 10-year old son of Sir Stanley Unwin, Rayner Unwin, who wrote such an enthusiastic review of the book that it was published by Allen & Unwin. 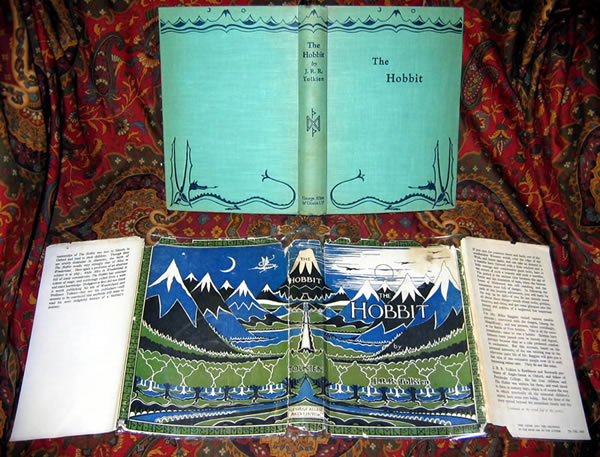 When 10-year-old Rayner Unwin produced this report for his father (and was paid a shilling for his efforts), publisher Stanley Unwin, he had no idea that the manuscript would go on to be a remarkable success. Neither did its author, J.R.R.Tolkien, Professor of Anglo-Saxon at Oxford, when, inexplicably, he jotted the famous opening sentence – ‘In a hole in the ground there lived a hobbit’ – on a blank sheet while examining papers! Yet, within a year of its publication, The Hobbit had won the New York Herald Tribune prize for children’s literature and was set to become a classic.

First published on 21st September 1937, The Hobbit is now recognized as an international bestseller: it has been translated in over 40 languages and has sold over 90 million copies worldwide. When it appeared in 1937, tolkien's friend C.S. Lewis unashamedly published rave reviews in the Times and Times Literary Supplement. The book was immediately successful, in a modest way; the first impression of The Hobbit was completely sold out by December 15, and the first published review in the Times Literary Supplement put it in a class with Alice's Adventures in Wonderland and The Wind in the Willows, but not all critics were as kind. Nevertheless, demands from readers for a sequel would lead Tolkien to begin work on the "new Hobbit", a work which would finally appear almost twenty years later as The Lord of the Rings.


The First Edition First Impression of the UK The Hobbit

The First Impression of the first UK edition was published September 21, 1937 by George Allen & Unwin Ltd. It was limited to only 1500 copies. The first UK editions prominently included the dust jacket designed by Tolkien. It was done in a wrap-a-round style in black, green and blue. It is certainly one of tolkien's best illustrations and demonstrates his innate sense of visual design. It has become one of the most recognized book covers of all time. Originally Tolkien intended the flying dragon and the sun to be painted red, but budget restraints forced the red color to be substituted with black. The now very rare First Issue dust jacket can be recognized by the hand correction in ink, of the 'e' in the misspelled 'Dodgeson', on the rear flap. 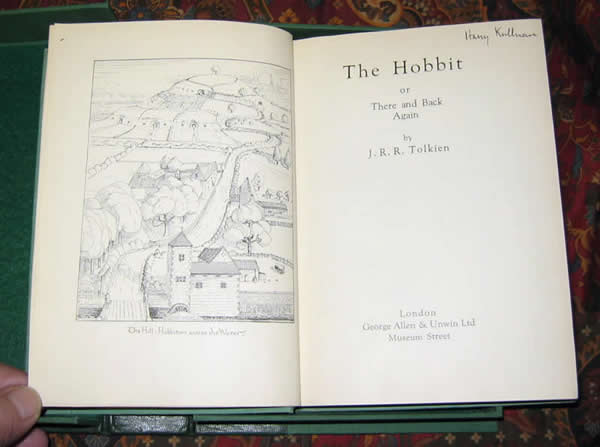 The first printing had NO color illustrations within the book itself, instead 10 black-and-white illustrations along with the two maps printed in red and black.

The book was constructed of green cloth boards and contained 310 pages. It was 19 x 13.5cm (7.48 x 5.31in). These boards were impressed with tolkien's dragon and a delightful mountain scene along the top.

Here is a list of errors cited by Wayne G. Hammond that the first impression was published with. It is unclear when all of these were corrected:

The Hobbit is the most expensive book ever sold by abebooks. Published in September 1937, this first edition first printing is in its original dust-jacket. Purchased by a buyer in Arizona from a New York bookseller for $65,000.

Here are some reviews about the book:

The Hobbit is “the outstanding British work of fantasy for children to appear between the two World Wars, and the first of a series of books which eventually brought Tolkien world-wide fame... All historians of children’s literature... agree in placing “The Hobbit” among the very highest achievements of children’s authors during the 20th century”
- Carpenter and Prichard, 254, 530)

“Professor Tolkien’s epic of Middle Earth was begun before the war, in The Hobbit . During and after the war he continued the story... [and] published it as a trilogy “The Lord of the Rings” from 1954 to 1955...
It is considered one of this century’s lasting contributions to that borderland of literature between youth and age. There are few such books— Gulliver’s Travels , The Pilgrim’s Progress , Robinson Crusoe , Don Quixote , Alice in Wonderland , The Wind in the Willows— what else?...
The Hobbit and its sequel, The Lord of the Rings , are destined to become this century’s contribution to that select list of books which continue through the ages to be read by children and adults with almost equal pleasure” (Eyre, 67, 134-5).

Buy yourself a first edition of The Hobbit

#CLP0043B - 1937 true 1st UK Edition 1st impression of The Hobbit by J.R.R. Tolkien, with custom slipcase and facsimile dustjacket - € 8600,-
Very first edition of the Hobbit, the desire for every serious Tolkien collector.
> Enquire about this book